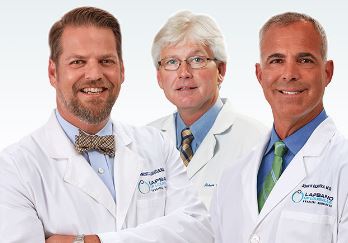 Kentuckiana refers to both sides of the mighty Ohio River. With three wonderful bridge options, access to exceptional healthcare is now more convenient than ever.

Drs. Lusco, Stewart, and Olsofka from Louisville Surgical Associates are now accepting patients on the sunny side.

Louisville Surgical Associates specialize in General, Laparoscopic and Bariatric Surgery. The physicians and staff at PMC Regional Hospital are pleased to welcome these exceptional surgeons.

Dr. John Olsofka has been in practice for ten years with Louisville Surgical Associates. He completed undergraduate training at Western Kentucky University, attended the University of Louisville School of Medicine, and remained in Louisville for completion of his general surgery training. Dr. Olsofka is board certified in General Surgery and has a special interest in minimally invasive surgical techniques. He maintains a teaching affiliation with the University of Louisville and is known nationally as a clinical instructor for Laparoscopic Ventral Hernias. He is a member of the American Society of Bariatric Surgeons, Louisville Surgical Society, Jefferson County Medical Society as well as the Kentucky Medical Association. Dr. Olsofka’s interest in Bariatric Surgery has foundation in the newly developed “minimally invasive” techniques.

Dr. Vincent Lusco III graduated from the University of Texas at Austin and completed medical school at the University of Texas Health Science Center at San Antonio in 1998. He completed his training in general surgery at the University of Louisville where he received extensive training in advanced laparoscopy and bariatric procedures, including assisting Dr. Jeff Allen with the placement of the first laparoscopic adjustable gastric band in May 2001. He joined Louisville Surgical Associates in July 2003, and along with Dr. Olsofka developed the bariatric program at Sts. Mary and Elizabeth Hospital.

Dr. Lusco is a board certified general surgeon and belongs to the American Society for Metabolic and Bariatric Surgery, The Society of American Gastrointestinal Endoscopic Surgeons, as well as the Kentucky Medical Association, the Louisville Surgical Society, and Greater Louisville Medical Society. He was awarded during his residency with the Abrahms-Waterman award for the most compassionate surgical resident, and in 2010 was recognized by Louisville Magazine as a Top Surgeon by his peers. In addition to participating in national and international prospective studies involving the Allergan AP LAP-BAND®, he also trains surgeons throughout the Midwest and East Coast on how to safely place LAP-BANDs® and develop successful programs. Dr. Lusco lives in Louisville with his wife and three sons.

Dr. Robert Stewart graduated from the University of Louisville Medical School and comp0leted his training at both Good Samaritan Hospital of the Catholic Health System and Emory University in Atlanta, GA. He has practiced General Surgery and Gastrointestinal Endoscopy in Louisville since 1992. Dr. Stewart served as Chairman of the Professional Review Committee, Surgical Services Advisory Board,, and head of the Department of Surgery at Jewish Hospital. Dr. Stewart served a Medical Staff President for Jewish Hospital and Catholic Health Initiatives merger.

He is currently active with the Quality Assurance Committee and Professional Review Committee. Dr. Stewarts’ enjoys teaching others and participates in the medical student mentoring program. he continues to serve as gratis faculty for the University of Louisville departments of surgery, family practice and podiatry. Students from the University of Kentucky physician assistant program also rotate with him on a regular basis. In addition to general surgery and endoscopy, Dr. Stewart maintains an active practice in breast disease and wound care.

All About The Hospital and What to Expect